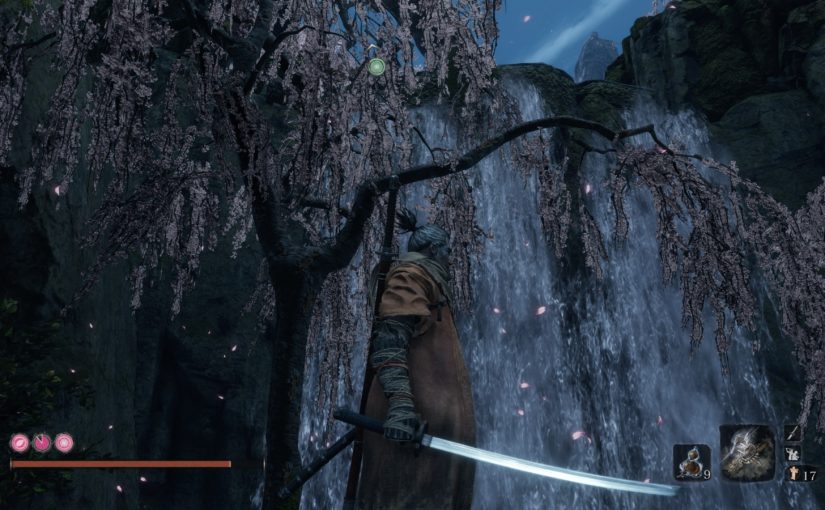 Better and Worse than Dark Souls

After beating Sekiro you still have one more action to take. It consists of walking up and pushing the action button to que a cutscene.

I sat in the stage for a week. It’s not like I kept playing and mopping things up. I just didn’t touch the game. After all that intensity and adrenaline, to end it all seemed more overwhelming. Because it was a weird, unbalanced, and enjoyable ride.

The show stealer is the combat and boss battles. For me, it’s the most innovative combat engine this console generation. It’s a momentum-based system effortlessly balanced between risk and reward. There’s few things as satisfying in video games as a Mikiri Counter into a deathblow on a boss. Especially after you’ve died twenty times on the jerk beforehand.

And that’s the flow. Cursing and swearing and chipping away at a boss a little more every time. Because the game makes you earn it. Some bosses are so overwhelming that at first that you think you’ll never have a shot. And it’s mostly in the offensive and pressuring in on the bosses that you make progress. Even at the end when you want to lob the last couple hits over the net, it doesn’t let you. You need to earn it.

And that’s what I see as the evolution on the Souls/Bloodborne universe. Because if combat is the evolution, narrative is the anchor.

In the Souls/Bloodborne games you’re a silent anonymous actor that’s been cast into a bizarre world and inexplicably propelled towards a destination that even you (especially you) don’t fully understand. It’s not even really clear why you’re fighting or if you should be fighting. And what little the world does reveal is only a reminder of the depth that exists beyond your perception.

Sekiro on the other hand doesn’t cast you as one of those nameless and faceless agents (but it might as well for how much personality you have). Instead, you’re the hero (or anti-hero). Which is fine, but that demands a more coherent narrative. And I’m sure it’s there. You can kind of read the tea leaves: Oh, these are the bad guys. Oh wait, these guys are. No wait… Confusion, and muddled motivation, doesn’t work as well when you’re trying to make people care about plot and people. It’s all very specific, and yet weirdly esoteric.

And then there’s this small feeling like they planned more. You just feel a sense of last minute cutting sometimes: areas that don’t seem very meaningful, concepts that seem innovative but never really matter (Dragonrot…), and a couple boss battles that break the challenge curve (I’m looking at you Headless Ape, you asshole!). In fairness, those boss battles are few and far between. But when you hit one, man does it take the wind out of your sails. Not because of the challenge, but because it’s so arbitrary. Even when you beat it, you’re not really sure why.

What a flawed masterpiece. Thank you Sekiro for all the Covid love.