To say that Kentucky Route Zero is beautiful is an understatement. In it’s own unique way, it might be one of the most beautiful games I have ever seen. And it uses aesthetics like a puzzle, twisting itself as the camera pans to change the meaning of what you’re seeing, without changing what you’re seeing. It’s a quietly terrifying experience. Even though you never feel the characters life is in danger, as there appears to be nothing that threatens it, it is the  danger of unhinging. Dying is the least of your worries, because it’s unclear if this world is bound by death.  Whatever the character is experiencing, it feels lonely and metaphysical, and if you try to hold onto anything it slips away from you.

Act 1 set the stage, with little in terms of narrative coherence. The game asks constant questions of you, and it’s unclear if your answers mean anything outside of your own internal reflection. And that reflection could be enough.

Many people probably never realize there’s a set of built in games on their 3DS. I had it for long enough without knowing, that I had built up hundreds of tokens (which you gather from walking around with your 3DS) before ever realizing they existed.  These tokens, and passing people who also happen to be carrying a 3DS, are what powers the Mii Plaza games.

Over the next couple of weeks will be a series of Mii Plaza “Non-Reviews”. They’re not long enough to deserve a proper review, but they are addicting enough to have their own posts.  The best thing going for all of the games, is that very pleasing Nintendo aesthetic. Something that Sony or Microsoft, has never understood in their avatars: no one wants realism in the representation of themselves, just give me the amorphous cartoon version (the “Nintendo” version, ).

Without spending any real money, this is as close to getting a free Mii game as it comes. The concept is incredibly simple, it’s RPG-lite-lite. Rescue the King (your Mii): Recruit some Heroes, enter a room with a monster, make some simple attack selections and advance to the next room. Damage to enemies is saved from round to round, so it’s really a war of attrition to find/purchase heroes and send them in waves until you’re through. There is some strategy as each Mii’s shirt color casts a specific type of magic, but a few complimentary combos is about the extent of it.
So it sounds like the simplest concept for a game imaginable, yet somehow I spent over a hundred tokens in a row recruiting heroes and sending them to their deaths. The simple mechanics betray and even simpler idea: people love progression. And as long as you keep at it, you receive items for your mii, and feedback in the form of progress on a map. Also, like most Nintendo games, the art style meshes well with the game.

I’m not sure if I can actually be upset with Real Racing 3.  It’s not like it promised me something that it couldn’t deliver, it’s just that within the confines of a free game, you really don’t have many options.  The app, with the a zoomed in fat white car, sat on my iPhone for months, and it was a long bus ride to the airport (after my PSP had died), that I finally gave it a chance.  Graphically is where it does the most right.  It looks somewhere between the PS2 and the PS3, nothing to be sad about for an iOS game.  And the setup isn’t bad, but it becomes obvious almost immeidately the path it’s going to walk you down.  The first few races aren’t difficult, and as long as you’re paying attention you can win easily.  This allows you to afford your first upgrades (courtesy of easy money and upgrade tokens).  Repeat in the next races, which ratchet up the difficult a little bit more (but not enough that you’ll lose), and the process begins again.  Eventually it will get to the point that instant gratificatoin is removed, and the only way to progress without massive amounts of time is by spending real money.  There’s nothing wrong with this model (you know it’s coming when you download the game), it’s just that it takes all sense of achievment out of it.  Still, if you need a solid free game, you could do a lot worse.

That said, it didn’t save it from being deleted after 25 minutes.

I thought I was really clever. Since Soul Sacrifice came out I’ve been having my eye on a Vita.  I asked a few people about a price drop, and the consensus was that since they didn’t declare it at E3, it probably wouldn’t happen until the PS4 releases. So when I saw a sale last weekend at Target I scheduled a grocery run to get me close enough to pick one up. It turns if I had been slightly patient I could have picked the thing up with Telltale’s Walking Dead and a memory card this week for the same price. Therefore, less than a week after the purchase, this review is partially obsolete.
—————————–
When the clerk hands me the box the first thing I notice is how small and light it is. The cardboard is thin and it seems more like a box for a knock-off retro console, than a legitimate system.

Opening it up there’s not much inside. But it’s compartmentalized pretty well, almost like the original wii’s bento box appeal. Inside I’m surprised to find a pack of AR cards, not that I ever used them on the 3ds, but its a nice touch. 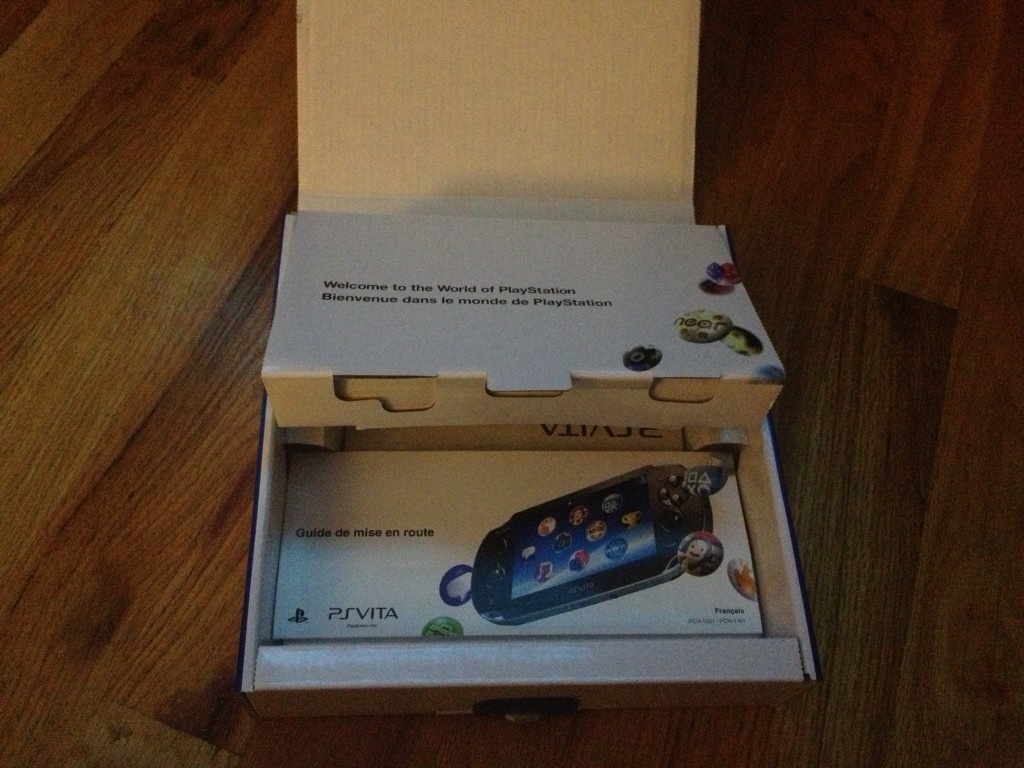 I loved my PSP.  The thing was beautiful and slick, and in my opinion the most underrated system since the Saturn.  But the initial setup was a horror (and it happened every-time the battery completely drained). So I’m shocked when I turn on the Vita and I’m through the setup, including wifi and my PSN account, in 2 minutes. The screen is also beautiful and movement fluid. It’s only now that the little thing starts to impress. Logging into the store and finding all the Playstation Plus titles for download is easy, significantly better than the process on the PS3, which is plagued with long load times and convoluted menus. However, when I go to download it freezes on the “Preparing to download” screen. A quick Internet search reveals this happens ALOT. Literally hundreds of people are complaining about it. I have to power it down twice before it finally downloads everything on the third try.
As for holding it in my hand, it doesn’t fit quite as naturally as the PSP, which had the analog stick perfectly placed on the left and the four Playstation buttons on the right. On the Vita the dual sticks seem to sit low, and the back touch pad remains a novelty. But all in all, its a hell of a lot more comfortable than the brick that is the 3DS.
Really, my biggest complaint, is the complaint that has always existed with Sony. The characters and the voice that guide you along lack the personality of a Nintendo system. A door opens, and a small orange stick figure walks through. Is he supposed to be my guide? Why would I bother with this? Then I notice that the tutorial considers itself enough of a game to have a trophy set.  Ok, maybe I’ll give it a try.
Conclusion- All the strengths and weaknesses of the Vita are evident the moment you open the box. The system is beautiful, well designed, but horribly neglected. Flimsy packaging, an unsolved critical but easily identifiable download problem, and just a general lack of games, shows how little attention has been paid to the thing. I think it has the potential to be a tremendously enjoyable system, like the PSP, but will inevitably be underrated and underutilized. 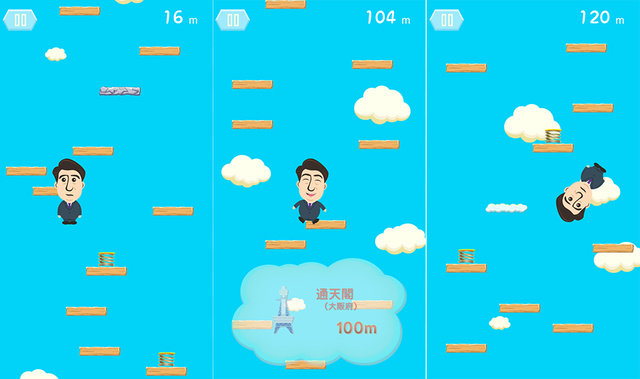 Shinzo Abe, Japanese Prime Minister made famous from his economic policy dubbed “Abenomics” (just type that in the economist.com and a mountain will come out), has an iPhone game.  Is it any good?  It’s not terribly bad, if that counts?

It plays like Doodle Jump with worse controls, but way more charm because… I guess, just because its a weird piece of Japanese propaganda.  It notifies you as you pass the height of Japanese landmarks, and different outfits (?) unlock from play-throughs.  If you’d like to give it a try, you can fine it here.

Played Flight control for 5 minutes before going to bed- Land some planes and dont have them crash. The tension is supposed to build as more aircraft comes on the screen and you play for a high-score.  This sort of thing can work (see any number of puzzle games), and maybe there’s a decent game in there, but I’ll never know because it was too boring for me to try again.

There’s almost no point in rating this game.  The only thing that would qualify it as a “game” is the interactive nature, while it admits at the very beginning there are no scores or lives, only the glimmer of a “story”.  But more importantly it’s what you take out of the short time you spent with it.  Over a few hours you’ll burn hundreds of items in your virtual fireplace, knowing there’s no point, knowing the laws of consumption are horribly unsustainable, and even knowing the world you live in is a dying freezing microcosm.

Being a part of the Humble Bundle is the perfect distribution platform.  I don’t think I could justify spending $10 on it, and I don’t think it wants you to.  It makes an active effort to question why you are spending time with your “Little Inferno”.  As you stare at the fire, the game questions what the purpose of the main character’s life is, and it’s only after awhile that you realize it’s been you whose been staring into the fire the entire time. 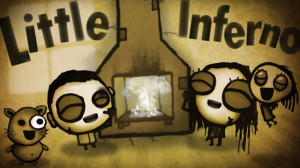 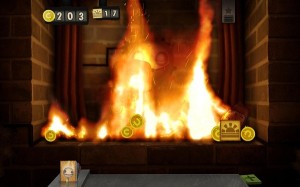