Many people probably never realize there’s a set of built in games on their 3DS. I had it for long enough without knowing, that I had built up hundreds of tokens (which you gather from walking around with your 3DS) before ever realizing they existed.  These tokens, and passing people who also happen to be carrying a 3DS, are what powers the Mii Plaza games.

Over the next couple of weeks will be a series of Mii Plaza “Non-Reviews”. They’re not long enough to deserve a proper review, but they are addicting enough to have their own posts.  The best thing going for all of the games, is that very pleasing Nintendo aesthetic. Something that Sony or Microsoft, has never understood in their avatars: no one wants realism in the representation of themselves, just give me the amorphous cartoon version (the “Nintendo” version, ).

Without spending any real money, this is as close to getting a free Mii game as it comes. The concept is incredibly simple, it’s RPG-lite-lite. Rescue the King (your Mii): Recruit some Heroes, enter a room with a monster, make some simple attack selections and advance to the next room. Damage to enemies is saved from round to round, so it’s really a war of attrition to find/purchase heroes and send them in waves until you’re through. There is some strategy as each Mii’s shirt color casts a specific type of magic, but a few complimentary combos is about the extent of it.
So it sounds like the simplest concept for a game imaginable, yet somehow I spent over a hundred tokens in a row recruiting heroes and sending them to their deaths. The simple mechanics betray and even simpler idea: people love progression. And as long as you keep at it, you receive items for your mii, and feedback in the form of progress on a map. Also, like most Nintendo games, the art style meshes well with the game.

A pretty veneer for nonexistent changes

When I began “4”, it was my intention to see the latest Shin Megami Tensei through to the end.   And as I’ve come close to completing the game, again I find that my desire to see it through isn’t strong enough.  There are definite reasons for this: the characters exist only to serve as mirrors, and the difficulty curve that was captivating at the beginning, starts to fall apart mid-way through (especially if you put in extra time outside the main quest).  And yet, those problems exist in many great games.  So where does it really stumble?  And here again, it goes back to that simple A,B,C choice.  Technically, there are more than three endings, but in reality they all fall in the same Law, Neutral, and Chaos silos that have framed many (but not all) of the SMT games before it.  So as soon as you realize what path you’re on, the illusion disappears, and it becomes the same old grind. 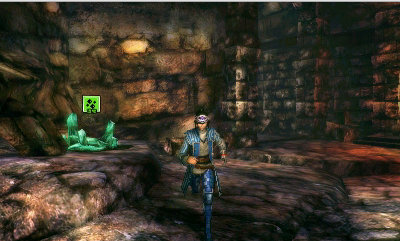 So where does that leave the game?  Well, it’s gorgeous (especially the dungeon perspective), it’s creative, it has a decent degree of freedom, and like most SMT games, it allows you the option to do as much or as little as you want.  It’s not a bad game by any means, and considering I spent over 30+ hours in the world, there must be something captivating.  However, this is not a side project, not a Persona game, but one of the “4” core games, and it deserves better.  The previous game in the main series was Nocturne, which came out nearly a decade ago, and from a technical level “4” is a strong improvement, but from a story and emotional level, it’s a rather large retrograde.

There would have been a time, not long ago, when I would have been excited about a new Shin Megami game, let alone an entry in the main series.  The DS entries, and to a lesser extent Persona 4, have sapped this excitement from me.  But here I am, giving it another shot, because Nocturne and Persona 3 remain some of the best experiences I ever had on the PS2 (not to mention the earlier Persona’s)

First Thoughts, First Impressions:  The low key neon which somehow helped to emphasize the overall darkness from the early PS2 era Shine Megami titles appears to be completely gone (this started with Persona 3, but is complete now). It’s replaced with 80s camp anime, bright sunlight, and a throw back to early persona games in character portraits. Even the quirky and endearing personalities from persona 3 (and to a lesser extent 4) are missing.  Although I will say that the actual dungeon crawling looks amazing and works well.

So how does it play?  I’m not sure why, but there is something about the game.  Despite what I expected, I was actually very excited to continue playing it yesterday. It’s the beginning though.  I put quite a few hours in Strange Journey, but never ended up finishing it, because at a certain point in time you have to choose a very distinct ending.  Once you get there, it’s all out of surprises.  So I assume I know how 4 will end:  3 bland choices, evil, neutral and good. Although Nocturne avoided this convention, so it could always surprise me.

The best thing I ever read in middle school

Positives:  The writing.  Which means:  the story, the characters, and the scope.  It creates an entire world, but never has the need to leave the one area you explore in.  It doesn’t try to do too much, but as a result everything it does, it does well.  The battle and upgrade systems are simple but lend themselves well to tinkering.  The character art design is solid, if not as strong as other Yasumi Matsuno games. And as a personal plus, the main character eschews the normal jrpg bullshit of being a whiny teenager, and is instead set in his late 20s.

Negatives:  I rarely say this for the time sink-hole that is the rpg genre, but Crimson Shroud could be longer.  The table-top piece setup doesn’t harm the game at all, but it only gets away with the complete lack of animation because the writing is so strong.  In the end, you just want it to have a bit more of everything.

Verdict:  There’s beauty in the simplicity, and it allowed Nexus and Level-5 to make a very good game. But it’s probably unrealistic to think it could be stretched into anything with enough substance to be great.  Still, it’s so easy to like while it lasts.

Memory:  The use of the word “slurry”.  It’s poured down someone’s throat at the beginning.

Crimson Shroud is such a simple game that it makes you want to make a game.  There is no animation (besides your table-top like pieces falling over), but the story/dialogue adds more life to the characters than other games with an abundance of animation (even a solid game like Fire Emblem Awakening leaves you feeling cold in comparison).  This is also the reason why it’s deceiving,  even if you were to emulate the mechanics exactly, you would be no closer to making a good game.

It’s no surprise; Yasumi Matsuno has created perhaps some of the best written games ever.  Tactics Ogre has a darkness and intensity that buries it in a depth few other games I’ve ever played can begin to compete with (Shin Megami Tensei Nocturne perhaps).  While Vagrant Story is an aesthetic marvel on all levels.  Crimson Shroud isn’t as stellar in any of these ways, but it’s staying with me in the best kind of way.