Much More than the Sum of Its Parts

Pop culture references the Walking Dead so incessantly, that I could never play the Telltale versions. They looked fine enough, but I just couldn’t bring myself to do it, even though I have the series sitting in Steam from a Humble Bundle. The Wolf Among Us is so enjoyable that it makes me want to go back and give those early games a try.

The story and universe carry the most weight.  The game does a tremendous job of weaving actual fairy tales into scenarios. For example, in a rage, you’re given the option to rip off the arm of a character named “Gren”. Once you realize it’s Grendel, the homage becomes clear.  When TWAU is at its best, it forces your hand in split second decisions. The options provided are often true to the situation, yet uncomfortable. As many games as I’ve played I would assume I’m desensitized to violence, but it turns out I can’t tear someone’s head off when given the choice. 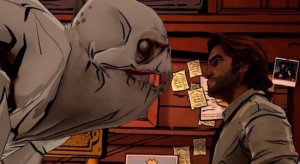 The biggest problem is that it’s glitchy as hell. It’s not clear if this is all versions, or just the PS Vita one. As testament to this, it’s the first game that has actually crashed my Vita and forced a hard reset (the error screen that appears is terrifyingly similar to the blue screen of death). Even when it’s running normally there are long loading times, stuttering between scenes, and a few points that require closing and reopening the application. 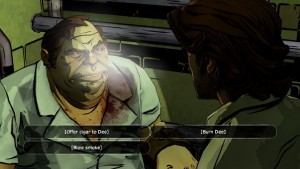 However, it’s well worth the bugs and the minor character inconsistencies, to have an experience in Fabletown. No single episode (of the 5) is nearly as powerful as the story taken as a whole.  They’re made to be played together.  And it’s this consistency and patience that elevates the package to something special.
Review: 5 stars (out of 5)
Memory:  The End